Coming back to the biography of Heinrich our family cello after a couple of months being busy with other things. Heinrich the cellist and his wife Maria had met at Strasbourg in 1903/04. He had come from faraway Tangermünde (joining the army), she came from the other side of the river Rhine (Bruchsal), to train as a secretary at the main hospital of Strasbourg. Like the rest of the city, the university and its hospital had benefited from a major programme by the newly founded German Empire to make the city a showcase for the world.

Maria's niece recently told me that she remembered her mother saying that Maria worked for "Professor Lederhose" at Strasbourg, which the children found understandably funny. It was almost true, though, add an extra "d" that is not part of the German word for leather trousers, and you get:

a prominent surgeon who, like Maria, had arrived from the other side of the river as a youngster, studying medicine at Strasbourg and then rising through the ranks there. After WW I, he ended up in Munich. He even has a syndrome to his name, Ledderhose's disease or plantar fibromatosis, which I understand is just a bump under the sole of your feet.

He also has a Gedbas entry - no children listed, but you can find his wife, parents and several generations of ancestors here. His paternal grandmother was Sophie Susanne Dupré, and her ancestry and relations are the main focus of the online genealogists who gave us the Ledderhose entry. A name that neatly links back to the cello theme ... 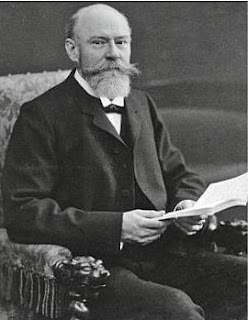 So where did Maria and Professor Ledderhose work? Presumably in the Hôpital civil (the French wiki is very interesting on its history, the English version less comprehensive). As I understand it, the Hôpital civil under German governance became closely connected to the medical faculty at the university, even though it wasn't a university hospital as such. It expanded dramatically using up former military land just south of the main island. This map shows the location in 1921: 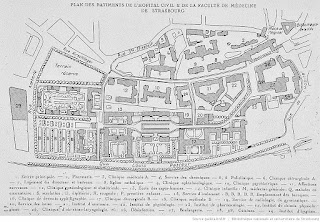 I think Professor Ledderhose must have worked as a surgeon in building number 6, ie Clinique chirurgicale A, in place since 1881 (Clinique chirurgicale B was only opened in 1914). Not much hope of finding the place today, as Wikipedia says it has been turned into a car park, but I'll take this map the next time I visit Strasbourg.

Historically, every department was housed in a separate building, but many of these have now been demolished, and the new hospital, opened in 2008, aims to combine all services in one block. Today, the facilities are employing some 11,000 people.

As always, all hints appreciated ...