a city through time

Looking into the 20th century transformations of Wuppertal (a conglomerate formed in 1929 the rivalling neighbour cities of Elberfeld and Barmen) to trace the steps of our old cellist, I was amazed at the changes around the Döppersberg station of the iconic suspension railway (Schwebebahn), next to the mainline station that is now Wuppertal Hauptbahnhof.

Looking from the station towards the historic centre of Elberfeld, postcards of 1902 show a futuristic Schwebebahn station on stilts looking like a spaceship has just landed, with the backdrop of a fairytale cityscape with spires and turrets. More to the point, perhaps, it could be an illustration from an original edition of a Jules Verne novel, and the whole Schwebebahn enterprise exudes the Verne spirit. Get on board for a ride through 1902 and into Döppersberg station (at 1:32) with this MoMA video (there is also a colourised version available and one juxtaposing the equivalent ride in 2015 - this last video is slower, the approach to Döppersberg is at 2:55).

By 1912 the spaceship is beginning to get sucked up by the surrounding architecture, but the fairytale cityscape remains intact: 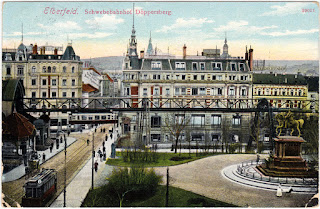 Source (this site sells vintage postcards, but this one may have sold out).

My great-grandparents lived there from 1919 to 1960, and during these four decades the area changed beyond recognition, only the Schwebebahn line remains as a landmark. I am getting the impression that the widespread destruction in worldwar II wasn’t even the worst of it. After that came the planners thinking we have to get in more cars, and by 1974 it looked like this: 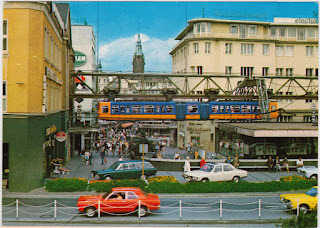 Further mess-ups followed, and when I visited this year, the whole area was still a building site, with a new Primark shop being about the only thing finished. Luckily the Schwebebahn has survived. No idea what it will look like when this round is done, but I’m quite sure the 1912 incarnation remains my favourite. I should say, however, that in the residential areas away from the main roads some of the art nouveau loveliness survives, and there are lots of green spaces in the city too, so mustn't grumble, and I'll be certainly happy to visit again.

Further postcards from Wuppertal are on twitter under the hashtag #talpost, and my photos from September are here.

What all this reminds me of is a series of 8 images by Jörg Müller of a fictional city going through the 20th century, published in 1976 as: Hier fällt ein Haus, dort steht ein Kran, und ewig droht der Baggerzahn. Many years ago I lived in a tiny room at the top of an old house in Marburg, where somebody had artfully displayed these images around the walls of the vast staircase. I think one followed the forward direction of the timeline while going up, but one could debate whether cities have really gone up or forward at all.

UPDATE 22.7.2022: In June I made another daytrip to Wuppertal and travelled the entire length of the Schwebebahn up and down, from Vohwinkel to Oberbarmen and back, with a few stops along the way. The redevelopment at Döppersberg is finished now, so I took lots of photos vaguely aligned with the perspective of the postcards above (didn't have them with me to find the exact spot). See my new Flickr album of the trip for lots of Wuppertal views.