stepping up the scales

Slow progress in the Plague Year Bach project, as I am still stuck half-way into the Courante from the fourth suite. But the movement has already served the purpose for which I chose it, namely making me lose the fear of keys with more than two flats.

Essentially, the keys with up to two flats or sharps are easy on the cello as you can play the scales using only elementary technique, ie first position and open strings for orientation. Losing the guidance of open strings (and harmonics) is what makes me panic whenever I see more than two flats or sharps in a key signature, like eg. this very lovely repertoire piece: 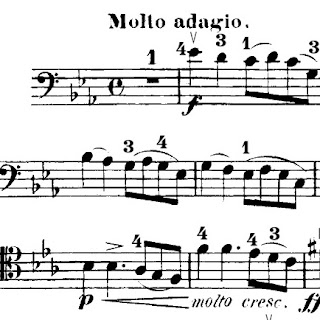 that one was fairly obvious, but I’m now taking the upper octave of that and shifting it down the strings to make it the lower octave for the next scales, and I get:

NB books seem to prefer the sequence 1x24 1x24 124 124 134, which has only four shifts instead of five, but the extensions add difficulty where I’m already in unfamiliar terrain, so I prefer mine.

PS the example shown above is the beginning of the Élégie by Gabriel Fauré, Op 24. Watch a very lovely performance from Nadège Rochat here.