Every picture tells a story No. 40

Season finale - as the list of entries gets a bit unwieldy, I am going to close this door and open another one in a few weeks time.

Auguste from the East Prussian patchwork family, who worked in Allenburg at the bottom of the steps moved to Hamborn on the river Rhine (now part of Duisburg) in October 1922, aged 24. The following year she married fellow East Prussian Ernst Leopold and stayed at Hamborn the rest of her life.

She lived there at four different addresses over the years, here she is entering the house in Knappenstraße 43, where she lived with her family from the 1920s through to the mid 1960s, in a photo dating from the 1950s: 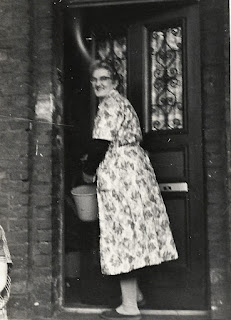 Knappe in this context refers to a skilled miner working below ground. Although it's emphatically not named after a poet or writer, the Knappenstraße is part of the poets' quarter (see also this link), a large housing development built between 1905 and 1924 for workers of the rapidly growing steal and mining. A photo of the street appears in this document on page 22.