Did I mention that Venice's vaporetti (water buses) are the best public transport ever? OK, they may be as crowded as the London underground or any other busy transport system. But the sights are so much nicer. We did an (almost) complete round on one of the circular lines, which takes 2 hours (imagine going round London on the circle line!) and have been up and down the grand canal countless times, discovering new sights each time. Oh, and very reassuringly they actually stop people from boarding when the boat is packed. I expected them to just keep pushing ...

so here's to the hours spent on board: 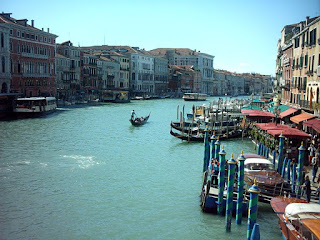 (image borrowed from Wikipedia while the digital camera containing our pix is still travelling elsewhere ... )

Oh, and while we were there, the newspapers reported that Stonehenge, Eiffel Tower, and the pyramids were among the most disappointing tourist attractions, according to polls on site. Canal Grande was mentioned among those that did not disappoint.
Posted by Michael at 4:51 PM