think with the senses

... science coverage will return soon, but here's a round-up of other Biennale impressions:

Leon Ferrari from Buenos Aires, Argentina, exhibited a series of collages, combining real (I think) headlines from the catholic paper Observatore romano (such as "Pope stresses importance of the family") with historic depictions of violence pepretated by or in the name of the church, such as crusades, inquisition, etc. Not a new topic of course, but very hard-hitting and sadly still relevant.

Oscar Mun~oz, from Cali, Colombia, showed three portraits in statu nascendi, very simple black ink paintings on grey background, painted in two or three minutes, so you get your art while you wait. except that the screen goes blank again afterwards and the process starts again. To avoid boredom, we get 3 portraits on 3 parallel screens.

Several US artists have visualised in one form or the other the fates and/or number of soldiers killed in Iraq and Afghanistan. A somewhat more original view on war is presented by Nedko Solakov from Bulgaria, who explored the patent dispute between Bulgaria (which continues to produce Kalashnikov machine guns without paying royalties) and the Russians who claim patent rights to the design. As the artist points out, the Russians have used the cyrillic alphabet, invented by a Bulgarian, and lactobacillus bulgaricus for centuries without paying royalties ....

Hiroharu Moru (Japan) made people hold a huge helium-filled balloon with a question mark on it on a line such that the question floated ca. 5 m above their heads. No answers provided, though. 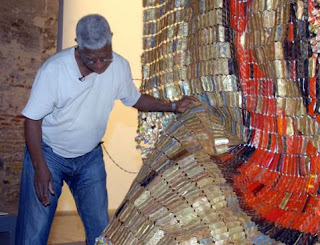 El Anatsui (Ghana) produced two large (6m*3m ?) golden vlies like tapestries by recycling metal tops and screw caps from bottles of wine and other alcoholic beverages. Boy that must have taken a lot of drinking. But it looks nice too. And I can relate to it as I also keep things like corks, you never know what you might be able to use them for.

In the Australian Pavilion, Daniel von Sturmer presented video installations of some very simple but clever experiments involving gravity and cubes. In one, which took me a couple of minutes to figure out, you see a dozen small wooden cubes tumbling around in a large hollow cube in rather unpredictable way. My theory is that the large box is rocked around in all directions on a movable support, but that we cannot see this movement because camera and lighting are connected rigidly to the box. So what looks like random forces pulling the blocks in this or that direction, piling them up or knocking them down, is in fact gravity.

In Thailand's pavilion, one gets a sensual experience of the Buddhist saying that we should be unsticky like the sand -- which doesn't care whether an emperor walked over it or whether a dog excreted on it. The sand is real, the dog is thankfully only a video installation.
Posted by Michael at 12:58 PM