All our instruments series, episode 10

Sorry there has been a slight delay in the continuation of this series. This has to do with the instrument I am going to present this week, which has ended up in my care just now, but has been in the family for longer than any other, a bit more than a century.

It is my grandmother's piano, built by August Förster in Leipzig in 1912. My grandmother (Frieda Eberle, née Nagel) was born in 1902, studied at the Conservatoire in Bückeburg, but then married in 1924 and had three daughters. Widowed in 1945, she gave piano and singing lessons at Idar Oberstein until her early death in 1962.

The piano was in storage from 1962 to 1968, but then moved in with us and stayed with my mother until her death. Although she had a somewhat conflicted relationship with the instrument, I think it is safe to say that it has been played at least occasionally for most of its 107-year life time so far. 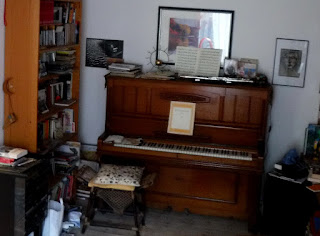 Among my mother's belongings I discovered a 90 min recording of her mother playing piano pieces (and singing an opera duo). As I don't know much about piano sonatas, I'll copy the complete set list in here and would be grateful for any thoughts on the choice of pieces.

Oh, and I put all of it on YouTube as well, so here's a video that doesn't feature my playing for once:


Here's the complete list of pieces recorded in January 1958