There is currently a trend of revisiting the ancient Greek legends from a female perspective, with books like Circe by Madeline Miller, A thousand ships by Natalie Haynes, and The silence of the girls by Pat Barker getting much attention.

Lavinia by Ursula Le Guin (1929-2018) came ahead of the wave, published in 2008. After catching up with the Aeneid in her 70s, remembering her frustration that she missed out on it at school, Le Guin gave flesh and blood to the woman Aeneas marries after his arrival in Italy, joining the dots that Vergil left unattended.

I do love novels that fill in the gaps in the official history or legend by recreating neglected voices (see also The Moor’s account, and Robert Harris’s Cicero trilogy), and this is a fine example to add to this collection. Even if we’re not exactly on firm historical ground here, as there are several centuries between the Trojan War and the foundation of Rome, which Vergil tried to connect with the figure of Aeneas.

Le Guin’s Lavinia, daughter of King Latinus of Latium, is a very sane and engaging human – a refreshing antidote to all the mad slaughter going on in the ancient legends. She is aware that she isn’t real in a strict historical sense, but only brought to life by the poet, i.e. Vergil, who also makes a shadowy appearance. This slightly surreal element is handled with subtlety though and thus didn’t bother me too much.

Another plus of these books is that they offer a chance to brush up the classics without too much of the gore and testosterone overload of the original texts. If I find the time I might carry on the Trojan trail with Circe and/or Natalie Haynes’ new work. 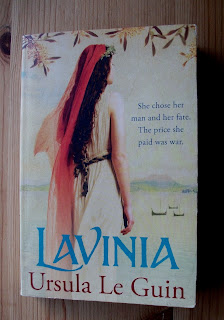 My Lavinia, discovered at the antiques fair last summer. I do love the cover as well as the content.