Author copies of my new book:

arrived yesterday, and it is definitely available now (Eg from Blackwells, buecher.de, or amazon.de.)

When the copies arrived, I realised that the more recent cartoons (by Roland Wengenmayr) are actually printed in colour - I had no idea. Which makes this my first book with colour illustrations in the text (there were a few colour plates tucked in at the end in Non-Standard Computation).

This is the second collection of the sketches I write for the Nachrichten aus der Chemie, the magazine of the German Chemical Society, covering roughly the last decade. The first collection was the nine million bicycles book published in Feb 2011. 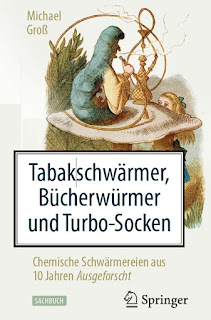 The caterpillar in question is the tobacco hornworm / tobacco hawk moth (Manduca sexta), which has a remarkable resistance to nicotine as well as some other chemical tricks up its sleeve which I discussed in one of the sketches included here. I also tend to mention it whenever I write about insect ecology.

I have a strong suspicion that Lewis Carroll had this species in mind when he invented the hookah-smoking caterpillar that confuses Alice with unhelpful answers in Alice's adventures in Wonderland, so I suggested to use an Alice illustration for the cover and got through with the idea.