I had great fun writing a feature on the future of cities - how to achieve sustainability as continuing global urbanisation leads to growth often hardly manageable - while also visiting some present cities including Düsseldorf and Berlin, but also looking at London and Brussels en route (and reflecting on possible cities to move to when Brexodus time comes).

At the time, people in traditionally car-crazy Germany were protesting against the motor show IAA, calling for SUVs to be banned in cities, and turning out in masses to the Fridays For Future climate action demos, so these current events have found a mention in my feature which is out now, as part of a special issue on the Anthropocene:


The future is urbanised

Glad to see that the Guardian has also picked up the SUV issue today. 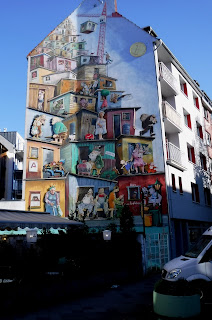 My photos from this latest trip are still in the queue waiting to be processed (apart from those I took at the FFF climate demo, which are here), but here's one of from Düsseldorf earlier this year.


PS I don't know why I haven't created a tag for cities yet, but this is my third feature about them, following the ones on the evolution of cities and on urban ecology and evolution. Both are now on open access.