A few years ago I discovered Pancol’s novel Les yeux jaunes des crocodiles (2006), which featured a scholar of mediaeval romances struggling with her own 21st century romantic life. I really enjoyed that one, although it appears that I forgot to review it.

So I was thrilled to see that her latest work seems to be doing something similar to biosciences. A biochemist studying insects and knowing all about their weird and wonderful love life, but finding her own more weird than wonderful.

Rose studies the firefly Lamprohiza splendidula in Paris and discovers that it produces a molecule that is very efficient at killing tumour cells. Her molecule may also be of interest to the cosmetics industry, which could lead to much faster profits for the start-up she’s planning to launch. Decisions, decisions. Meanwhile her mental health also needs attention due to traumatic events that are being dug up in the course of the novel. All being made more global by professional transplantation to New York.

I found the novel interesting as an example of science in fiction (with a few references to actual research papers listed at the end), although I’m slightly spooked when it travels too close to our dystopian present. We are clearly in the present day with Drumpf and all the rest of it.

The science remains a bit superficial, and one of Pancol’s contacts should have told her that there is no such thing as a Nobel prize for biology. Also, the dilution series that Rose performed to prove the miraculous effect of her compound reminded me of homeopathy and the “memory of water” claimed by some real-life Parisian researchers more than of any real science.

Scientists in the book have only two possible motivations – get rich quick by launching a start-up (allegedly the driver of all the researchers at the lab in New York), or curing disease. The actual quest for knowledge and understanding – so important for Rose in her private life as she struggles with her past trauma – doesn’t get a mention as motivator of scientific ambition.

Pancol is hugely successful in the French market, but as far as I can make out her work hasn’t been translated into English. Even the English title and the setting in New York didn’t help. Of course, the same book written in English by an author based in New York, with the converse excursion to Paris, would be translated into 30 languages within a year.

So catch the bed bug en français if you can. 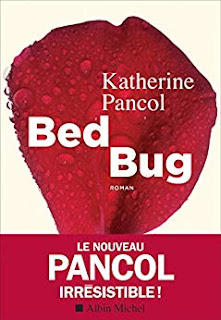