Two years ago, I visited the start-up company First Light Fusion up the road in Yarnton, which aims to develop small fusion reactors quickly enough to make a difference for climate change, and wrote a feature about it.

A year later I got to compare and contrast the other side of fusion research, reading a book by two young physicists about the multibillion dollar enterprise that is big fusion, based on the tokamak concept, which requires massive magnetic fields to contain the plasma:


My book review is out now in the first issue of CI of this year:

"the authors place all their bets on the next generation tokamak, Iter, which is currently under construction in France. Run as an international collaboration, Iter is currently scheduled to create its first plasma in 2025 – although this target was originally set for 2018. The scale and costs of the project are eye-watering, but to these young physicists this is where the future of sustainable energy lies." 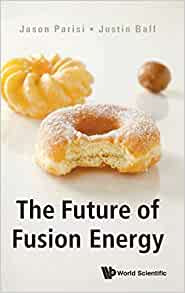 The baked goods on the cover represent different types of fusion reactors, the donut being a tokamak, the cronut a stellarator, and the small spherical thing represents inertial confinement fusion.
Posted by Michael at 11:03 AM