Stars rich in phosphorus: Seeds of life in the universe

Surprisingly dense exoplanet challenges planet formation theories
New detailed observations with NSF's NOIRLab facilities reveal a young exoplanet, orbiting a young star in the Hyades cluster, that is unusually dense for its size and age. Weighing in at 25 Earth-masses, and slightly smaller than Neptune, this exoplanet's existence is at odds with the predictions of leading planet formation theories.

VLBA finds planet orbiting small, cool star
Precision measurements made with the VLBA have revealed that a small, cool star 35 light-years from Earth is orbited by a Saturn-sized planet once every 221 days.

Between shark and ray: The evolutionary advantage of the sea angels

Are vultures spreaders of microbes that put human health at risk? 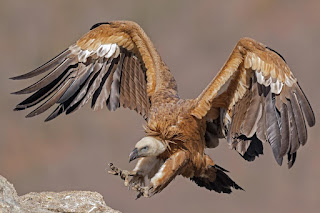 A new analysis published in IBIS examines whether bacteria, viruses, and other microorganisms that are present in wild vultures cause disease in the birds, and whether vultures play a role in spreading or preventing infectious diseases to humans and other animal species.
Credit: Jorge de la Cruz

Nanostructures modeled on moth eyes effective for anti-icing
Researchers have been working for decades on improving the anti-icing performance of functional surfaces and work published in AIP Advances investigates a unique nanostructure, modeled on moth eyes, that has anti-icing properties. Moth eyes are of interest because they have a distinct ice-phobic and transparent surface. The researchers fabricated the moth eye nanostructure on a quartz substrate that was covered with a paraffin layer to isolate it from a cold and humid environment.

'Price of life' lowest in UK during COVID-19 pandemic, study finds
The price the UK government was prepared to pay to save lives during the COVID-19 pandemic was far lower than in many other developed nations, a study has revealed.
Confirming my suspicion that we have deatheaters in charge.

Easy to overdose on paracetamol if you're selenium deficient, says research

Consumers don't fully trust smart home technologies
Not fully? People shouldn't even buy any of these things. Opening your home to surveillance and hackers is the opposite of smart.

A remarkably well preserved mammoth skeleton from a Siberian lake.

Oh and the penguin colonies spotted from space are also in the Guardian. Disappointingly, the sattelites only saw vast areas of ice discoloured by guano - not vast huddles of actual penguins.