Heinrich the cello has now been in our family for a century, so I've used the lockdown to write up his biography of sorts - a family history / memoir / general obsessing about all things cello-related - which is now almost finished. It's all written in German so far, but obviously if anybody wanted to publish it in English, I'd be happy to do a translation. Some bits and bobs have appeared on this blog before, so here's a table of contents with PDF links to sample chapters in German as well as cross-references to relevant blog entries in English.


Status update 25.10.2022: The initial manuscript is complete, the first three chapters are online as PDF files hosted on my website / backups on Google Drive (GD), see links below. This month, chapter 1 has grown by a couple of sections, after the surprising discovery Heinrich's poems. The new bits are currently on pages 8 (last para) through to page 20.


4. The next generation
the right instrument
obscure composers
Beethoven for cello and flute


5. Late beginners
beginning to see some improvement
the dancers will fall over


6. Bach in quarantine
take a leap
stay home play Bach
jigging on
memorising Bach
according to Bach
running slowly
back to the beginning
second wave
movements in tiers
new year, new minuets
sadness and strength
jigging into spring
recording some progress
memory full
jigging into summer
summer holiday
not sure where I'll draw the finish line for the Bach suites adventures, but check the bach tag for further movements and musings.


I'll probably find a space where I can fit these random cellists in as well:
a cellist lost (Zdenka Cerny)
Johann Benjamin Groß


Books which have helped and/or inspired me with this, and which I have reviewed on this blog include:
The cello suites: In search of a baroque masterpiece, by Eric Siblin
The music instinct: how music works and why we can’t do without it, by Philip Ball
Never too late: My musical life story by John Holt

Also, other memoirs that inspired me in this project are now labelled with the memoir tag. 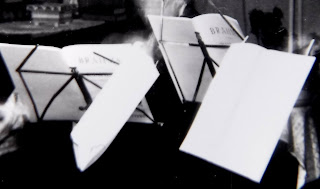 We have a grand total of two (correction: three) photos of Heinrich in his string quartet, dating from 1927. Only now did I notice that zooming in on one of the photos you can actually read what they're playing, it's Brahms. As Brahms only published three string quartets, we know almost exactly what was played ...