Hubble uses Earth as proxy for identifying oxygen on potentially habitable exoplanets
Taking advantage of a total lunar eclipse, Hubble used the Moon as a mirror to study sunlight that had passed through Earth's atmosphere. As a result, Hubble detected Earth's own brand of sunscreen - ozone - in our atmosphere. The technique simulates how scientists will search for evidence of life on planets around other stars.

New insight into the evolution of complex life on Earth
This is about the proteasome being involved in the cell division of archaea (as well as in eukaryotes).

Fossil mystery solved: Super-long-necked reptiles lived in the ocean, not on land
By CT scanning crushed fossilized skulls and digitally reassembling them, and by examining the fossils' growth rings, scientists were able to describe a new species of prehistoric sea creature. Tanystropheus hydroides, named after mythology's hydra, was a twenty-foot-long animal with a ten-foot-long neck. 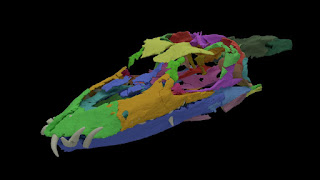 New science behind algae-based flip-flops
a bit of seasonal science ...

Completing the set: 'Coupon-collection behavior' reduces sex-ratio variation among families
A new analysis of sibling records from more than 300,000 individuals suggests that some parents continue to reproduce until they have children of both sexes.

Tanystropheus (see picture above) is also reported in the Guardian.