once there were emperors

Tangermünde is a small town with a big history. First mentioned in 1009, it was an important centre of trade and power in the times of the Hanse (14th and 15th century, mainly) and was a residence for Emperor Charles IV for a while, but then curiously fell by the wayside. For instance, the Berlin-Lehrte railway line, opened in 1871, might have had a station serving that town, but in the end the neighbouring town of Stendal (where the French novelist Marie-Henri Beyle found his pseudonym) got the station and thus easy rail links to Berlin and Hannover. 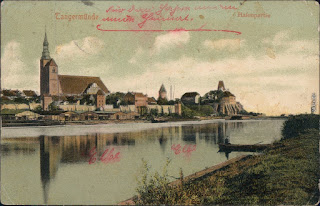 The picturesque city fortification seen in the classic view from the river also has something to do with it – although it no longer protects the city from invading armies, it does protect it from the floods of the river Elbe, so pulling down the walls and expanding the city into the floodplain wasn’t a workable idea. This way, the town retained much of its historic appearance and size. In 1903, it had 11,500 residents (now it has even fewer, just over 10,000)

The railway did arrive eventually in the shape of a branch line of just 10 km length, between Tangermünde and Stendal, built in the 1880s mainly for the sugar factory, but passenger trains are also available. Richard the railway man was presumably involved in that project, as he moved his family (including young Heinrich the future cellist) to Tangermünde at that time. After a brief spell in Stendal, Heinrich went to school (Bürgerschule) there and later married in the historic church of St. Stephan, although by that time he was an army musician based far away in Lorraine. At the same time, his sister married there as well, and her family stayed in the area. One of her descendants got married in the same church more than a century later.

All of which means I really should go and visit that place, I’ve never been.