In the course of my project concerning Heinrich the cello (and Frieda the piano) it dawned on me that in the 1960s, my family not only lost the musical tradition, but also the habit of living in civilised cities (as opposed to in the middle of a field which is where I grew up).

Having obsessed about Elberfeld and Strasbourg already, I have now decided to make this a series, called #lostcities and using period postcards for illustration. I’ll pick a few nice examples out of the around 20 places where the three generations before me (i.e. 14 people with their offspring) lived, basically, the places where I wouldn’t mind moving in myself. 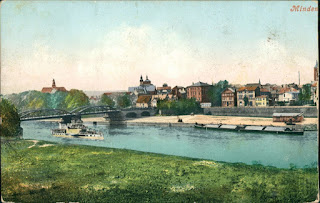 Minden in 1907. The Fishers' district and the canal crossing are to the right of this frame.
Source.

Number 3 in the series is Minden, where my grandmother Frieda, the pianist, grew up. Her mother died relatively young but her father stayed in Minden half a century, from his marriage to his death, so this may be a record for the longest stay in the same town in this generation of otherwise quite mobile people.

There is a geography board game using the tag line “Finden Sie Minden?” (Can you find Minden?) which seems to suggest that it is so obscure many people don’t know where to find it. In fact, the reason why it remained small when other cities grew in the 19th century is linked to its special location. Let me explain.

Minden is located on the river Weser just downstream of where it cuts through a mountain range, so it’s presiding over the most convenient place to travel North-South without having to cross those mountains. Accordingly it has always been militarised and fortified, and the city walls strangled its growth in the 19th century when other cities that had been less significant, started to industrialise and grow rapidly, including eg Elberfeld. The walls only came down in 1879, by which time industrialists had set up their industries elsewhere.

On the other hand, this location also made Minden a transport hub. One of the earliest long-distance railway lines in Germany connected Cologne with Minden, and the town also had early rail links to Berlin and Hannover, so it was an important rail hub in the 19th century and it still is, to an extent There are still direct trains running Cologne to Minden, and even some ICE trains stop there. They are a bit hard to find but I checked and, for instance, on Monday at 23:47h you can catch ICE102 from Minden to Hannover.

It is also a central crossing of water ways, as the major East-West canal (Mittellandkanal) crosses the river Weser just to the North of the city. The canal stretch connecting the rivers Ems and Weser as well as the spectacular river crossing were completed in 1915. At that time, Frieda and her parents lived just a short walk away from the canal bridge, in the picturesque fisher’s quarter (Fischerstadt) in the corner between the former city wall and the river bank. Frieda’s parents stayed there for the rest of their lives and looking at the old photos I can see the attraction (although Minden fails my official residence criteria for not having a university).