The cities in the series were generally “lost” by the time I started school inasmuch as my family lost the habit of living in cities, like my grandparents and their parents had done between 1900 and the 1960s. Incidentally, there are also a couple of cities that were lost in a territorial sense in the wars of the 20th century, including Strasbourg, and in a more profound sense, Königsberg.

We learned at school that Königsberg is now called Kaliningrad, but from the pictures I have seen, my impression is that the centre of Königsberg was largely destroyed and the Russians built a new city called Kaliningrad instead. There was no population continuity either. The 20.000 survivors (out of more than 350,000 population in 1939) were deported to the Soviet occupied zone at the end of 1945, and the city was resettled as well as rebuilt. 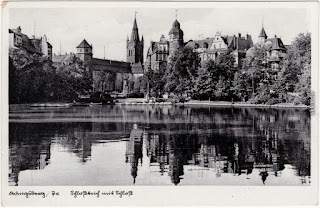 Königsberg castle in 1936. I believe the houses on the right of the picture are the beginning of Münzstr., so no. 10 would have been a bit further to the right of this frame. Source.

Unlike the families who lost their roots with the territorial losses, mine only spent a decade at Königsberg, so it is not a deep trauma but more like a dream that went up in smoke. What happened was that in 1935 my very enterprising great-grandfather started working as a salesman for the clothes manufacturer C. Brühl in Rheydt, and the company sent him to Eastern Prussia to open up new markets for their clothes there. I have no idea what Julius did or said to bewitch the East Prussians, but his sales tour went so well that his employers allowed him to set up a spin-out factory in Königsberg. This was a joint venture at first, but he managed to buy out C. Brühl after a few years, so for a very fleeting moment in history he had a factory with 150 employees to his name, the Kleiderfabrik Ostland in Kantstr. 10 / Koggenstr. 9-10 and was living in a grand apartment in Münzstraße 10, just around the corner from the Königsberg Castle and on the bank of the castle’s lake. The lake came in very handy when the city was firebombed just a few years later.

Julius lost his only son in the war but the rest of the family saw what was coming and moved to safety on time (which was illegal of course as it was regarded as defeatism, but my grandmother had an elderly aunt in the West who quite suddenly needed her assistance), and he himself got out on one of the last ship that got through. So, well, it was a nice dream while it lasted, but I suspect there are no traces left to visit. 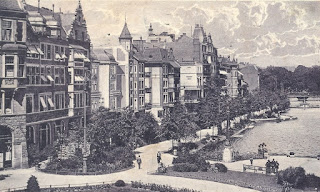 Promenade am Münzplatz, undated, I assume No. 10 must be included in this view (depends on whether the row has even numbers only or consecutive numbers).
Postcard, author unknown, source. 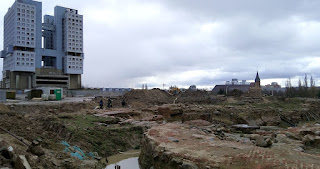 What's left of the castle: Archaeological excavation on old Palace Square near the House of Soviets in Kaliningrad
Source. What scares me most, however, is the vast empty space around the ruins. A look at Google Satellite images reveals that much of the area seems to serve as a vast car park now. The viewing direction in the photo above, from the excavation site towards the House of Soviets, is towards East-Southeast, roughly orthogonal to the long axis of the castle lake which is to the left of the frame. There appear to be post-war houses along the lake promenade, a block of three and then a block of four, ironically numbered with odd numbers only, 1 to 13.