a different kind of plague

With the pandemic and everything else going on, a different kind of plague has received very little attention, although it also causes devastation in several countries, the locust outbreak in East Africa and the Middle East.

Following a suggestion from the editorial team at Current Biology, I have looked into the fascinating science of why and how solitary insects turn into devastating swarms. While surveillance and early intervention can stop it from happening, there's no way of putting the genie back in the bottle, which is why insecticides are being applied at a massive scale. I find this a bit frustrating, as it would be both amazing and useful if chemical ecologists could come up with a pheromone that switches the swarm back into solitary animals that disperse and avoid each other. Might be useful for humans, too on occasions when they become a nuisance. (Oh, and I forgot to mention in the feature, the periodical cicadas now emerging in North America are unrelated, they are true bugs, while the locusts are grasshoppers. Will have to do a separate feature on cicadas some other time.)

How locusts become a plague 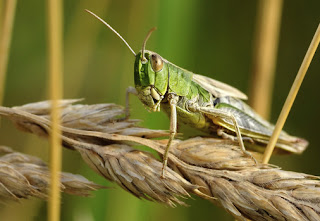 Locusts, while harmless as solitary individuals, are among the worst pests known to mankind once they become gregarious. (Photo: christels/Pixabay.) NB while this image was labeled as "desert locust" on pixabay, I am told it may show a different species of grasshopper. So for illustration purposes only, don't use the picture as a field guide.