So here we go again, the UK govt is making the same mistakes with the new variant first identified in India (B.1.617.2) as it did with the original Covid and then with the Kent variant (B.1.1.7) - play down the problem, let it spread, and only act when people die in their hundreds.

As the Death Eaters are going to deny it later, here's what we know today, 3 weeks before the planned end of all restrictions. B.1.617.2 is spreading exponentially in England. So far, this rise has been masked in the overall stats by the decline of the Kent variant, but now that B.1.617.2 is the dominant version, it is beginning to dominate the stats, and those stats are pointing upwards, at up to 30% increase week on week. I reckon that figure will still get worse as the variant spreads to places as yet unaffected. Follow Christina Pagel on twitter for the latest warnings. Also this analysis by David Spiegelhalter and Anthony Masters which just came out in the Observer today.

I hear the AZ vaccine which is predominantly used here, protects to 60%, so we have still 40% of the original risk. So if with B.1.617.2 as compared to the original strain, and all other things being equal, we're 2.5 times more likely to get infected, this cancels out, and we're just as screwed as we were last year with no vaccine. [Update: numbers corrected 1.6. - in the original version I stated wrongly that it would only take a 1.6 fold increase in infection risk. Still quite realistic possibility that this will happen, eg it's 60% more contagious than the Kent variant, which was 60% more contagious than the original strain, 1.6 squared is 2.56.]

Meanwhile, two English football clubs played the champions league final at Porto, Portugal, yesterday, and English fans were allowed to travel there and spread the the new variant a bit more. Spain is also welcoming tourists from the UK in June. Both countries will come to regret this before the summer is out. As Champions League games played a significant part in spreading the original Covid around Europe (First Valencia fans travelling to Covid-infested Italy, then Madrid fans travelling to Liverpool as Spain was preparing for lockdown), I really don't understand why these things are still allowed to happen.

So even though we're fully vaxxed now, we're still stuck on Mutant Island for the foreseeable future ... 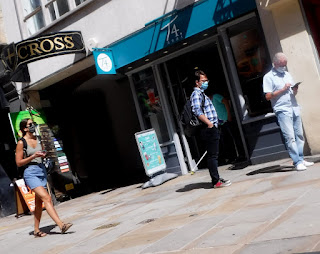 street scene from the first pandemic summer, own photo.

PS: Today's figures from the govt website just in:

If you ask me, don't plan anything for June 21 onwards that you wouldn't be comfortable with right now, or better still live by the rules we had before May 17th. The third wave is happening.