in praise of amateur music making

Play it again: An amateur against the impossible
Alan Rusbridger
Vintage paperback 2014

Reading Alan Rusbridger’s piano-centred memoir ten years after the events is perfect timing for me, as I am almost exactly ten years younger than him, so, right now, I can relate to his 2011 persona quite well. In fact, like him, I have also launched a crazy musical project at the age of 56 (ie last year, in response to the covid crisis), and like him I am considering writing a book related to it. However, my professional life doesn’t involve steering the Guardian through some of the most adventurous times in its 200 year history, so there the similarities end.

But even if you’re not 56 and seeking crazy music challenges, you might enjoy his memoir, eg as a celebration of amateur music making. This hobby has declined steeply with the advent of recorded music, as many of the pianists Rusbridger interviewed have discussed. Until the 19th century, if you wanted music at your wedding, in your salon, or just for your enjoyment after work, you would have to pay a musician to play it, or play it yourself. And many people did. To the extent that, as one interviewee remarked, a composer’s success in the 19th century was decided in private music rooms more than in the concert venues.

Since recorded music became ubiquitous, this motivation disappeared, and fewer people played. Those who played professionally had access to recordings of the best performers to compare themselves to, which drove up standards and opened a chasm between them and the remaining amateurs, where a continuous spectrum of standards had existed before. Which leads us to the somewhat deplorable state of the world where Rusbridger fears ridicule from fellow editors in chief for his musical hobby, whereas playing golf or tennis would count as a perfectly reasonable pastime for the editor in chief of a major media outlet.

The crazy challenge he took on, for no other reason than being impressed by a performance from a fellow amateur, was Chopin’s ballade in G minor, op 23. The score is included in the book, complete with markings from Rusbridger and his four piano teachers, the whole battlefield. A nice touch, and yes, to this non-pianist the piece does look quite scary. It lasts around nine minutes when played by professionals (see eg Olga Scheps here).

Other things happening in his musical life during the time include some chamber music – he also plays clarinet and appears to have many musical friends – building a music shed and buying a piano for it, and endless discussions with numerous pianists up to and including the stellar Alfred Brendel and Daniel Barenboim. I sometimes had the impression that he spent more time talking about the piano than actually practicing it.

Then there was the day job, which at that time involved dealing with Julian Assange and publishing the original WikiLeaks files together with Der Spiegel and the New York Times, and then the peak of the phone hacking affair, culminating in the revelation that the News of the World had (among thousands of others) also hacked the phone of murdered teenager Milly Dowler – a Guardian scoop that forced Rupert Murdoch to close the News of the World. (This story is also told from a different perspective in Tom Watson’s excellent book Dial M for Murdoch.)

So, never a dull moment, but I’m glad now that I’m more in control of my work-music balance than he was. He has since then retired from the Guardian post and become principal at Lady Margaret Hall, Oxford, in fact less than 1 km away from my place. I trust he has a lot more time for practice and playing now. 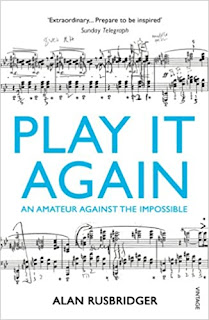