Among the neglected "extreme" environments that still provide habitat for a suprising number of species in surprising amounts, the deep subsurface has perhaps been the most underappreciated. Recognition of deep biotopes only really took off this side of the millennium, decades after environments like deep sea vents were explored.

The Deep Carbon Observatory (2009-2019) helped to fill that gap to some extent, and in its wake there are now several research stations exploring the deep underground, often based on disused mine shafts. Writing up the DCO results for the new edition of Astrobiology which comes out in August, I realised I hadn't covered this work since 2013. So about time for me to dig in and see what's going on below the surface. 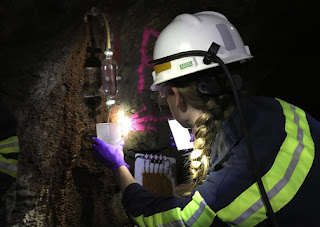 Several research stations have now been established at disused mines to investigate life in the deep subsurface. The image shows DeMMO field coordinator Brittany Kruger at work in a former gold mine in South Dakota. (Photo: © Caitlin Casar.)