From June through to August 2022, Germany offered a "flat rate" ticket for local and regional public transport for 9 Euros per calendar month. I used one in June, but was only there for a couple of days, so it didn't make much difference, although it did inspire me to revisit Wuppertal and travel the entire length of the Schwebebahn (suspension railway) up and down the valley. I think the Schwebebahn day pass alone would have cost something like 9 euros in normal times.

At the beginning of August, I was there for ten days and used the ticket to explore a few cities. There were three I hadn't seen before, namely Rheydt (featured in my lostcities series), Krefeld, and Rothenburg ob der Tauber. The latter I wouldn't have dared normally, as it is a globally famous tourist destination and I was kind of expecting it to be overrun, but on the day it turned out just fine, with fewer tourists than you'd see in Oxford on a normal summer day, and it was quite lovely. I also spent time in Aachen, Cologne, Düsseldorf, Frankfurt, Würzburg, and Xanten. That's 9 cities for 9 euros.

It did take me some time to get my head round the fact that this thing really works, that I was really allowed to go anywhere. It does change the geography of a country significantly if you can just hop on a train without worrying whether it will be worth the expense. And after many years of routinely using the intercity and high-speed network, it was nice to rediscover some of the little train stations that the ICE doesn't serve. The Regional Express (RE) trains that you are allowed to use with the ticket cover considerable distances though, including one of the first long-distance rail lines in Germany, Cologne to Minden, or a 200km stretch of the river Rhine from Koblenz to Wesel. With air-conditioned electric double-decker trains, they often offer a level of comfort that compares favourably with what Great Western would call an intercity train. (There was also a heat wave going on, so the AC came in handy.)

Some trains were crowded (but mask discipline was good, so no covid worries), some were late or cancelled, but hey, if it's basically free, you can't complain, right? It's all part of the big 9-euro adventure. I read that 31 million tickets were sold for June, so it's kind of a one off nation-wide summer experience you just have to enjoy. Designed in haste as a counterweight to the very non-green fuel subsidy (Tankrabatt), it may not have moved the dial on car usage, but it certainly helped many who would otherwise have struggled to pay for travel by any means.

I took a zillion photos, some of which are slowly turning up in this new flickr album. 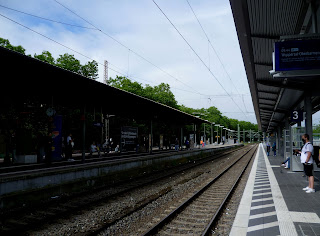 The regional railway station Düsseldorf-Bilk, where all my adventures started. It used to be an S-Bahn station with only the platform on the left, but has been expanded and upgraded to serve regional express trains of four separate lines. Basically every RE that crosses the river Rhine at Düsseldorf now stops at Bilk (plus three lines of the local S-Bahn trains). That's more trains and destinations than you get from Oxford main station, and they are electric.

Media coverage of the 9-euro ticket: