I am beginning to notice that my Bach practice is becoming a meditation exercise more than a learning one. I start with one of the five movements I know really well (1.3 - 1.6, 3.5), then the one I have recently re-learned after forgetting it during the gap time (2.5), and finally the one I'm trying to learn, the first bourree in Eb (4.5). By which time I am so elevated in spirit I have a completely relaxed attitude to any learning progress or lack thereof. I have managed to memorise 3/4 of the bars by now, so there may be an end in sight (but I know I've said that before).

In the long term, however, when the brain is full and the supply of learning ambition empty, I could imagine just playing two known movements each day for meditation, that's very soothing in troubled times.

I have run out of cello pics, but here's old Heinrich's bow, which I am using, while the young cellist uses her own bow. You'll notice that I have almost used up my first set of bow hair - not sure how many hours of playing that translates to, but it's a fair few: 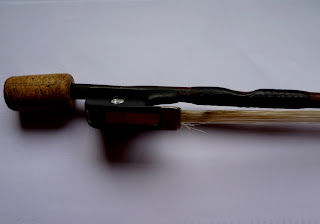 The cork is useful because I hold the bow from the end not from above - the way I learned to bow the double bass many years ago. A bass bow has a much bigger frog so enough material to grab it by from the side. With a cello bow it's a bit trickier but the cork keeps it in place. Also, I read that at the time when Bach wrote the suites, the modern bow hold from above hadn't become common practice yet, so I can always claim I do it in the name of authenticity. Moreover, on the top right you notice the dent where old Heinrich's index finger has worn off the bow. By holding it from the other side, I can preserve this historic trace of our old cellist.