Of the ca. 15 children coming out of the East Prussian patchwork family, we have seen Auguste Faust as a young woman in Allenburg, at the bottom of the stairs of her workplace, and then again half a century later with her sisters in Lippstadt, West Germany.

I don't have individual portraits of all the siblings as young adults, but here's what I've got. First, have another one of young Auguste (loving the Vermeer-style setup with the window): 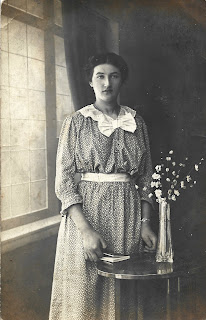 Maybe the small book hints at the occasion being her confirmation?

This is the only one I have of Luise (later: Hiesske), which dates from 1925. 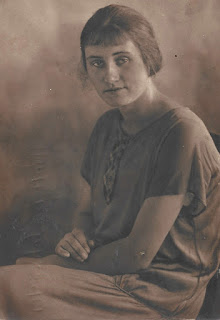 Concerning their other siblings, we have no early portraits of Johanna (Krieger) but lots later in life, and none whatsoever of the older brother, Karl Otto Faust. There are images of Adolf Faust who probably didn't survive WW1: 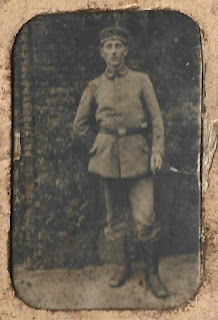 I'm guessing he belongs to the first Faust family in the patchwork. Which may also be the case for aunt Therese, whose mysterious position in the family tree I will investigate later.