rising from the rubble

I'm pleased to learn from the Oxford Times that the University's plans for redeveloping the site of the former Radcliffe Infirmary are likely to get the go ahead very soon.

This is a major development in the heart of the city, and it was relief to see that the University has a master plan for this, which looks really good -- I attended a consultation meeting when it was first released. There is also a similar master plan for improvements of the adjacent Science Area.

Previously, a lot of the building work in both areas has followed the logic of tumour growth rather than any large scale planning. The Radcliffe Infirmary site (where I occasionally worked in the course of a collaborative project with biomedical researchers) was a textbook example to demonstrate what happens if you allow people to build whatever they feel like. I have a traumatic memory of a rickety first floor extension towering on stilts above an equally ramshackle (but apparently unrelated) shed. Whatever space was left between the extensions to extensions was crammed with pipes and looked more like a derelict chemical factory than like a hospital and research site.

So, well, most of it had to be knocked down, only two or three listed buildings survived, and the site now looks like this: 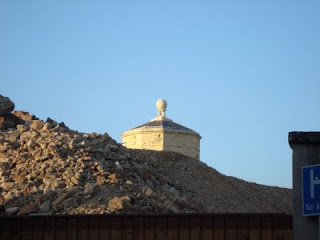 but we are promised a whole new university quarter, which will be open to the public as well, with through roads. And with buildings designed by real architects, not cobbled together by cowboys. Can't wait. Lots of modern architecture to take photos of ...
Posted by Michael at 1:33 PM