Back in 2003, my daughter and I took part in a palaeo-anthropological dig at Sima de las Palomas, in Southern Spain (as described in Birds/Bees/Platypuses, page 77), as volunteers to support the research efforts of Michael Walker, who runs excavations at two sites in the area. Just ahead of our arrival, a team at the other site, Cueva Negra de Estrecho del Rio Quipar (which we also visited on our day off), had discovered an ancient stone tool, a hand-axe, which we duly admired. I think it was the first stone tool from that site, and there was a great deal of excitement about it.

Imagine my surprise now to read in last week’s issue of Nature that researchers using magnetic field measurements have re-assessed the dating of the geological layers in Cueva Negra, and come to the conclusion that this hand-axe we admired 6 years ago, together with another tool found at the same site, must be by far the oldest bi-facial stone tools discovered in Europe so far. (I think “bi-facial” implies that bits were chipped off from both sides of a flat natural stone to produce a relatively sharp edge.)

Cueva Negra was previously estimated to be 200,000 years old. The new date is 900,000 years, moving these two tools into the Early Pleistocene. (Technically, the magnetic measurements would also fit an even older date, but that appears unlikely considering the finds at the site.) Bi-facial stone tools from that era had so far only been known from Africa. The only European stone tools that are even older are uni-facial Oldowan tools from around 1.2 million years ago. Not sure what the precise scientific classification of the original owners of those tools is. While at Sima de las Palomas we were digging for Neanderthal remains, the Cueva Negra inhabitants must have been Homo heidelbergensis or something like that.

Will have to check up the literature about our site, maybe there have been exciting developments there as well and I missed them.

PS Bi-facial hand-axes look like this example from the excellent article in the Spanish version of Wikipedia: 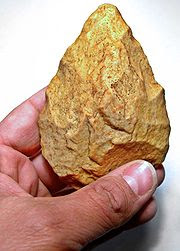