I saw Bat for Lashes at the Oxford Academy last Thursday, which was a first both regarding the band and the venue. As I only discovered BFL recently and only know the current album, it was all new territory, but certainly worth exploring. I was amazed to find that they managed to recreate their rather complex sound landscape on the stage. Front woman and creative genius behind the whole enterprise, Natasha Khan, is really sweet. If any proof of this were needed: she kicked off her boots after the second song and performed the rest of the show barefoot. Which of course reminds us of Shakira, who I hear praised BFL at the recent VMAs.

But the other musicians are forces to be reckoned with. Seeing them on stage, I realised that what keeps the whole ethereal voice thing from drifting off into easy listening land is the crisp and energetic drumming -- coming from a surprisingly harmless looking female (we weren't introduced, but according to the MySpace site her name is Sarah Jones). Then there is Charlotte Hatherley on guitars and bass, who is also pursuing a solo career (check out her myspace music site), and Ben Christophers on keyboards. Plus two string players in the background and possibly somebody else using computers (hard to tell what all those people behind big boxes are doing all evening). 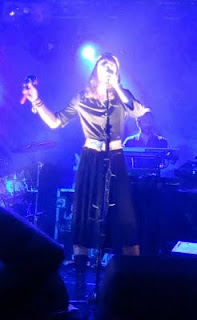 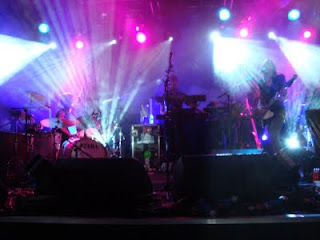 After the current tour around the UK and a few cities in continental Europe, they are going to support Coldplay in Latin America -- should be fun scaling this up to stadium size. Full tour schedule is here.