In this day and age, is it still defendable to burn wood waste on an open fire, not only releasing all that CO2 but wasting the energy as well and directly heating the atmosphere ? People around here seem to be particularly keen to do their bit for global warming by burning their garden waste (and sometimes even unwanted furniture) in the open air, e.g. as an autumn bonfire.

Here's one case which I find particularlly irritating as it involves an agency that is meant to protect the environment:

A few weeks ago, I started noticing that the unkempt wooded area by the river Cherwell, opposite the University Parks being cleared, and many cubic metres of waste wood being piled up and burnt in situ: 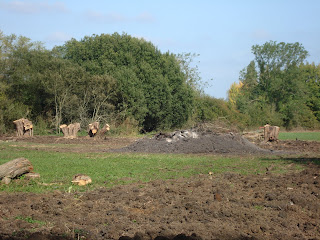 I did some grumbling and muttering each time I passed the site, but didn't know who to complain to. After a few weeks, this sign appeared: 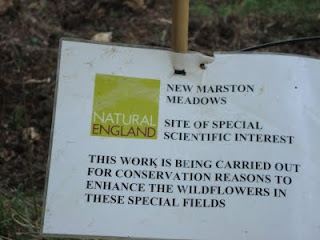 so I emailed Natural England to ask whether they considered it good environmental protection practice to heat the atmosphere (I bit my tongue and phrased the question a bit more politely than that). An adviser involved in the project explained that there was a surface water problem, which required clearing the ditches. Re. the wood clearing she said:

"In order to get to the ditches we needed to clear a large area of willows which are old pollards and have over the years split, grown into the ground and extended into the fields. We also coppiced lengths of the hedge. We had to get rid of the wood as being willow and poplar it will regrow if left on site and it was a choice of burning on site or removing off site to landfill or burning off site. It was decided to burn on site as we didn’t want lots of movement of machines over the fields which can cause compaction and more surface water problems. 2 sites have been burnt on, one was an existing bonfire site and the other is in fact lifted off the ground using logs and a tin sheet so that the heat doesn’t come into contact with the ground. The ash is going to be moved off site."

Replying to this I asked why they didn't offer the wood as firewood to local people to collect (e.g. via Freecycle, which works amazingly well in Oxford), but haven't heard back.

I really can't believe that what they have done was the best option for the environment.
Posted by Michael at 11:00 AM