Crime scene -- do not enter, says the ribbon. While it's true we're not allowed to enter, it's not really a crime scene, only a fictional one on a film set. The college isn't called Burton College in real life either, it's Mansfield College on Mansfield road.

What's happening here, I guess, must be some new instalment of the TV series "Lewis" a spin-off from the very popular Inspector Morse series based on Colin Dexter's books. As both series are set in Oxford, one does occasionally bump into a film crew in town. In this case it was very convenient, as the "crime scene" was close to the college entrance, so lots of people could watch the filming from the road. Always fun to watch people work, especially if it's something vaguely creative. 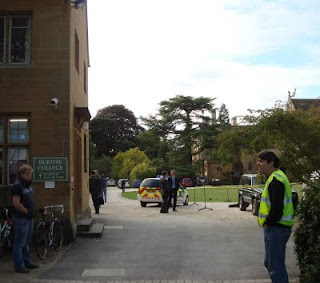