how greed wrecked our economy

I don't care much about money, so it takes exceptional circumstances to get me thinking about the state of the economy, but I have a feeling that the time has come to look at these things more closely than I normally do. What I'm particularly struggling to understand right now is why and how politicians (especially in the UK!) have allowed finance to run wild without realising that this would result in the systematic destruction of the real-world economy, i.e. of the companies that actually produce useful things but only yield modest profits.

There was an interesting comment by Andrew Simms in yesterday's Guardian, explaining how several British corporations originally founded with an agenda committed at least partially to moral principles (e.g. by Quaker families) came to be corrupted and wrecked by corporate finance. Some quotes I highlighted:

Twinings' fate highlights the quietly corrosive, long-term effect of the excessive privilege given to finance. Over decades its hypnotic hunger for unrealistic profit has corrupted or wrecked many other eminent corporations in Britain – often companies that, like Twinings, helped define our national identity.

Glib dismissals that this is the way of the world, the inevitable outcome of otherwise efficient markets, ignore the fact that indulging the lords of finance has wrecked the productive economy, just as much as it bankrupted the public finances.

If the corporation is to have a future, the public sphere will have to demand a redesign – and return finance to its proper, subservient role of supporting the wider economy.

On a related note, in a comment published last week, Cambridge economist Ha-Joon Chang challenges the notion that deregulated finance helps the economy overall. In the long term, Chang argues, the economy was doing better in the "bad old days" of the 1960s and 70s, when regulations were much tighter. 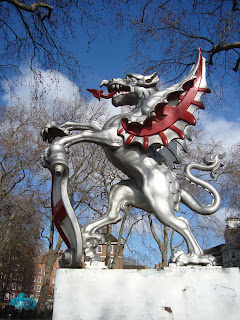 This charming little beast guards the boundary of the City of London, I think it may be telling us something about what's going on in the square mile!
Posted by Michael at 10:27 AM