pick a species as UK mascot

At the forthcoming Earthwatch debate you can vote for a species to serve as an environmental mascot for Britain.

Among the five debaters will be Dr George McGavin, winner of the Earthwatch ‘Irreplaceable Species’ debate in 2008, when he won over the audience with his knowledge and wit, arguing the case for bees. This year Dr McGavin, BBC Lost Lands presenter and Honorary Research Associate at the Oxford University Museum of Natural History, will once more set the audience buzzing about bumblebees as his choice for Britain’s environmental mascot.

Also entering the fray to find the archetypal British species will be Tony Juniper, writer, campaigner and independent environmental advisor who will sing the praises of the song thrush; Professor Stephen Hopper, Director of the Royal Botanic Gardens, Kew, will be rooting for the oak tree; Dr Johannes Vogel, the Keeper of Botany at London’s Natural History Museum, will paint a colourful picture of the bluebell; and Dr Samantha Burgess, Earthwatch Senior Research Manager (Oceans), will make waves for deep-sea coral.

The debaters have been challenged to choose a species which both represents the UK’s invaluable natural heritage, but also the British people’s inimitable spirit. They will work to persuade the audience that their chosen species is vital to ecosystem health and British social and cultural identity.

Earthwatch executive vice president Nigel Winser says “Our annual debate at the RGS is always a thought provoking and entertaining event, while addressing serious environmental issues. Do come along and cast your vote and help us choose the new environmental mascot for Britain for the 21st Century.”

For full details and to book free tickets, click here. 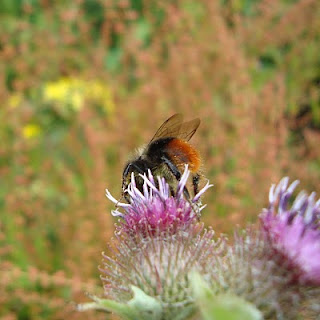 Perfect excuse to dig out one of my own bumblebee photos from this summer! Vote bumblebees!
Posted by Michael at 3:41 PM