I’ve come to realise that there are a few very good reasons why I ended up being a writer. It’s not just that I can do it, many people can put fingers on a keyboard and press them down, but I actually like to communicate in writing and often prefer it to speaking. So here’s my case for the written word.

Writing is, firstly, more advanced and civilised. People have been talking for hundreds of thousands of years, but writing only for something like 10,000, I guess. But that argument leads me into trouble, as writing is now at risk of being supplanted by more recent forms of communication like video and podcast which again rely on talking. So scrap this.

From the emitter’s point of view, I prefer writing to talking, because I can edit what I have written until I am happy with it, while I can’t withdraw what I have spoken once somebody else has heard it. There are many painful memories of things I have said and later regretted saying, but I can only remember very few things that I wrote and released to an audience and then regretted. And that is actually a very significant discrepancy, as I do in fact release more words in writing than in spoken language. So if I calculated the stats on a “number of regrets per million words released” basis, the difference would be very drastic. And it’s all down to that most wonderful achievement of civilisation, editing.

From the recipient’s point of view, I prefer reading to listening for a very selfish reason, namely that I am in control of what I read, but I’m not in control of what I hear. Unless, of course, if I decide to be very rude and walk away from somebody talking nonsense or hit them over the head. As time goes by, and I’ve accumulated enough life experience to be familiar with most of the nonsense that people talk, I find it increasingly difficult to be in a situation where I am forced to hear people talk about things I don’t want to hear. I’ve heard people conducting messy relationship break-ups from their mobiles in public places, and others describing their cancer operations to a carriage full of strangers on a train. Call it control freakery, but I do prefer to be in a quiet room with a book. If the writer bores or annoys me, I can always put the book away and pick up another one without offending anybody.

For these reasons I tend to be a bit bemused if people insist on calling me instead of emailing, “because it’s more direct” (the telephone uses the same electrons in the same cable!) , and slightly worried over the unstoppable rise of the podcast and the audiobook, and other technologies that go backwards in time in that they replace written communication with talking. Even if the talking is done by a machine that I can control via an “off” switch, I cannot change the way it speaks to me. Why do you want to have somebody else read a book to you with their chosen speed and emphasis, when you could pick your own instead?

So I could happily withdraw to my ivory tower and communicate with the outside world only by writing – except for my immediate family, who occasionally need to be yelled at – but there is one small problem. The fact of the matter is that people don’t buy books because they like how an author writes. Many tend to buy books by people who have appeared on (or at least been mentioned on) the telly. Preferably by people who have appeared on the telly and talked in a very persuasive way.

As I don’t appear on the telly all that much and have been hopeless on the one or two occasions I tried it, this leaves my books with a rather small (but, I like to think, highly intelligent) audience. And that’s a problem to which I haven’t found a solution yet . 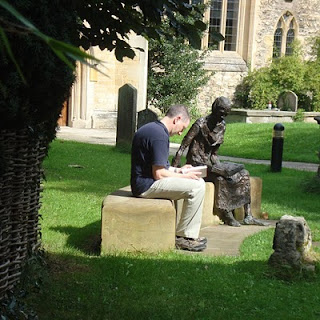