Monkey study suggests that they, like humans, may have 'self-domesticated'
Asif Ghazanfar led a team of scientists who determined that changing an infant monkey's verbal development also changed a physical marker of domesticity: a patch of white fur on its forehead. This is the first study linking the degree of a social trait with the size of a physical sign of domestication, in any species. 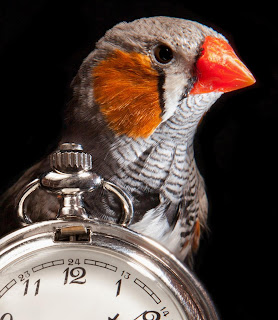 A team of researchers from Penn State and New York University has deconstructed an important "biological clock" in the zebra finch brain and found that the "wires" between neurons, called axons, play a critical role in the precise timing of the birds' courtship song.
Credit: Christopher Auger-Dominguez

Researchers develop framework to identify health impacts of self-driving vehicles
Loving the use of the word "impacts" in that title.

Have some blue fluorescent tardigrades