I recently visited Wuppertal to look at the places where our family cello Heinrich (and its eponymous owner) lived a century ago, in what was then Elberfeld and Barmen. The conglomerate of Wuppertal isn't generally known as a tourist destination, although I tend to think it should be, as the suspension railway (Schwebebahn) gliding through the airspace above the river Wupper makes it unique. On previous visits I have also seen art exhibitions in the Von der Heydt Museum and as a child I must have visited the zoo there.

Walking from the main station Wuppertal Hbf (which was Elberfeld Hbf a century ago - see this slideshow of old postcards) to the first address where Heinrich lived, I came past this neogothic marvel and took a photo just for touristy interest. 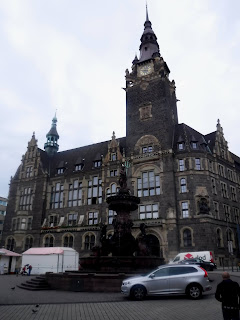 Only after I arrived back home and read up a few things about old Elberfeld did it dawn on me that this building, known as the new townhall (Neues Rathaus), must have been where Heinrich the cellist went to work - he came to Elberfeld because he found a job in the city administration there. Which fits nicely as it is only ten minutes walk away from the flat where he lived in the 1920s, in Schleswiger Str.: 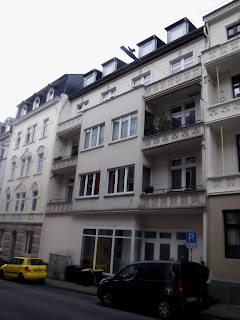 From the 1930s till the end of his life he lived in Gronaustr, which is technically in Barmen but still very close to Elberfeld, and a very nice location too. Behind the buildings you have the botanic garden going up on a hillside, and to the front you look out over the valley of the river Wupper and towards the green hills on the other side. 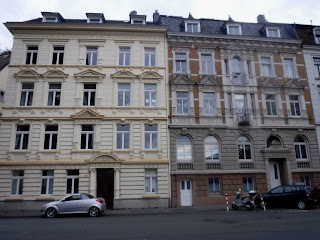 There are more photos of my visit in the relevant Flickr album now, the ones specifically relating to Heinrich are tagged with his name. I've also thrown in a photo of his string quartet - I'm still trying to find out who the other three musicians were. 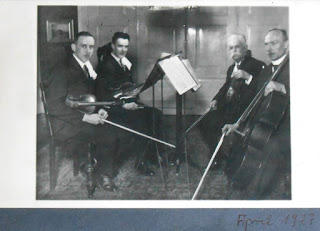 Amateur string quartet in Elberfeld, 1927 - can anybody identify the other musicians?