An Earth-sized rogue planet discovered in the Milky Way

Shining a (UV) light on the glow-in-the-dark platypus
Turns out platypus fur is biofluorescent - astonishing that this hasn't been noticed before. 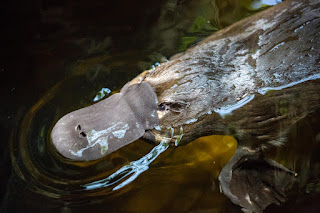 The Platypus (Ornithorhynchus anatinus) is one of the oddities of nature: a mammal that lays eggs, and is like a mix of several other animals being duck-billed, beaver-tailed, and otter-footed.
Credit: Goddard Photography

Touch and taste? It's all in the tentacles
Scientists identified a novel family of sensors in the first layer of cells inside the suction cups that have adapted to react and detect molecules that don't dissolve well in water. The research suggests these sensors, called chemotactile receptors, use these molecules to help the animal figure out what it's touching and whether that object is prey.

Losing ground in biodiversity hotspots worldwide
Agriculture is eating into areas that are important in protecting some of the most biologically diverse places on the planet. Most of this new agricultural land is being used to grow cattle feed.

Smart bottle brushes
They look like microscopic bottle brushes: Polymers with a backbone and tufts of side arms. This molecular design gives them unusual abilities: For example, they can bind active agents and release them again when the temperature changes. With the help of neutrons, a research team from the Technical University of Munich (TUM) has now succeeded to unveil the changes in the internal structure in course of the process.

Two studies expand insights into Denisovan ancestry and population history in East Asia
Lots of PRs from institutes involved have been promoting one study or the other, which got me confused, so I'm using the PR from science magazine which discusses both.