Cello teacher Janet Tinbergen, who taught our young musician for more than 10 years, has passed away in December 2020, aged 75. I wrote an obituary for the amazing “Other Lives” series in the Guardian, which you can read here. A separate appreciation by the Oxford Music Festival, where she served for decades, is here.

I was wondering whether to explore some of the local connections in a longer obituary or feature for a local paper, but it looks like the Oxford Times and Mail don’t do obits any more, and they didn’t respond when I tried to contact them, so I’ll just drop a few notes here.

Janet inherited the family trait which her father’s biographer, Hans Kruuk, described as “pathological modesty.” So she went as far as admitting that her father was a scientist, but would never have mentioned that he was anything special. In fact, Niko Tinbergen, a pioneer of behavioural biology, won a Nobel prize, as did her uncle, Jan Tinbergen for economics. (I believe the two are still the only pair of siblings among Nobel laureates.) When I got to know her through sitting in and taking notes on my daughter’s cello lessons, I figured out the connection and read the biography (review here). Over the following years, I always enjoyed the stark contrast between her perspective as a daughter, typical quote: “he and his bloody birds”, and the knowledge that she was talking about one of the greatest minds of the 20th century.

To me, a key indicator of his greatness was that he devised experiments that were so simple you could get a bunch of primary school children to replicate them, but they still did answer important biological questions. So it struck me as almost tragic that he hadn’t been able to communicate the beauty of his achievements to all of his family. However, where scientific (eg mathematical or anatomical) information was helpful for improving cello technique, she did not shy away from using it, sometimes prefaced by: “As the daughter of a scientist, you will understand …”

Niko’s disciples at Oxford included the globally famous science communicators Richard Dawkins and Desmond Morris. The latter did come up in conversation at times. Intriguingly, Janet was aware of Morris’s work as an artist late in life, although she described herself as blind to visual arts.

The Oxford ecologist David Lack was reportedly the person who invited Niko to visit Oxford and consider moving here, which he did in 1949. This I only found out when researching Janet’s obituary. For a decade, I played wrong notes in the Festival’s family class also attended by the Lack family (one generation later), and I didn’t know about their Tinbergen connection.

Oxford University named the massive 1960s brutalist building housing the Zoology and Psychology departments after Niko Tinbergen (opened in 1971). In 2017, it was diagnosed with an incurable asbestos problem and cleared for demolition (although I wasn’t quite sure how it can be safe to demolish if it can’t be made safe to use - maybe the university just wanted another world-beating new building and welcomed the excuse). The last walls of the building disappeared around the same time as Janet died, ending seven decades of Tinbergen presence in Oxford. Although, of course, quite a few cellists around here will remember Janet's creative technique vocabulary, from rigmarole to flapping chickens, for many years to come. 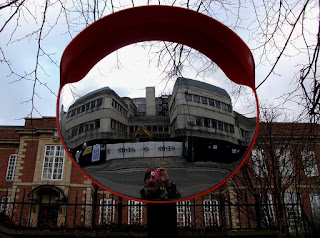 Reflections on the Tinbergen legacy ...
(own photo, taken Dec 2018, when the mirrors were set up to secure the gates of the demolition site)