The Mercator projection is everywhere these days, although some of us are aware that it is problematic because it inflates the size of countries further away from the equator, thus creating the wrong impression that South America is no bigger than Greenland, and Africa smaller than North America. Alternatives are available but rarely used.

The reason is, of course, Google maps. The Mercator projection is mathematically the simplest way of straightening a globe to make a flat map. You just use the longitude and latitude lines as an orthogonal coordinate system, as your x and y axes. So once you know coordinates of places, it is computationally extremely simple to create a flat map. Nothing wrong with that when you do that for a city map or even a small country, but when people use Mercator to (mis)represent the globe, as Royal Mail does, I come out in a rash.

Reading the biography of the man behind the projection, I learned that mathematical simplicity wasn’t his motivation. He had happily drawn heart-shaped maps of the world before, and he had produced much-coveted globes. The problem he set out to solve was based on the fact that sailors in his time navigated by compass bearing, i.e. the angle between their direction of travel and the measured direction of magnetic north. The simplest way to navigate would be to keep this bearing constant throughout. However, this isn’t the shortest route on a globe, and on most maps it isn’t a straight line. So, to Mercator, the attraction of the orthogonal projection was that the longitude lines will always be straight and vertical, so a route following compass bearing will always be at the same angle to them and thus also be a straight line. Simples.

Born in 1512 as Gerard Kremer, the son of a cobbler latinised his name in line with humanist contemporaries such as Erasmus. His life of just over 80 years neatly falls into two halves, split by a near death experience courtesy of the Spanish Inquisition, after which he decided the Spanish Netherlands weren’t safe for him and settled in the small town of Duisburg on the other side of the river Rhine. Having grown up not too far from that place, which in the 20th century became a major centre of heavy industry complete with Europe’s largest inland harbour, I found it cute to read about the peace and quiet Mercator found in the town, where he completed most of the work that he is remembered for, including the first maps using his famous projection and the book of maps that gave us the word “atlas”.

His move was linked to plans to launch a university at Duisburg, which then fell through. The town later did get a university, which was founded in 1655 but dissolved in 1815. The modern university was set up in 1972 as a Gesamthochschule. In 1994 it was named Gerhard-Mercator-Universität, but in 2003 Mercator lost this honour again, as his university merged with the University of Essen.

Another irony is that, while Mercator mapped all of the known world, and even some speculative geographies that turned out to be fictional, such as a ring of islands surrounding the North Pole, he never left the boundaries of a map of the Rhineland area shown at the front of the book, which covers around 400 km by 600 km. (It amused me that this map prefacing a book about a map maker shows Cologne on the wrong side of the river Rhine. As Colonia is a Roman foundation, it’s not hard to remember that it belongs on the left bank.)

Crane published the biography in 2002, before Google maps started flooding the world with Mercator projections, but I was still a bit disappointed that the epilogue doesn’t even mention the perception problems it creates and the alternative projections that others have produced to create a fairer representation of the planet. The biography is available as an e-book but the paper version seems to have gone out of print, unfortunately. Mercator's 500th birthday in 2012 would have been an opportunity for a new edition both to celebrate his work and re-assess it in the brave new world of Google maps. 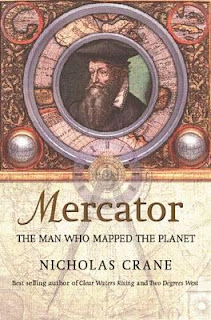 PS: I just discovered his descendants are on GedBas. No obvious connection to my family history, but good to know.