I'm sharing some vintage photos in a new flickr album of family history with social context, i.e. no portraits, but people engaging in activities or posing outside their work place, this kind of thing. To provide some more supporting information than I would put on flickr, I've started a new series here, which is called "Every picture tells a story". I've retrospectively tagged the recent blog entries about Heinrich's string quartet and about the station master of Adamsweiler to become the first parts of the series. (Part of the inspiration is the ongoing series of picture stories in Der Spiegel, called Familienalbum, where I submitted the string quartet photo but failed to get it published.)

Now to a village inn that was run by a cousin of that Adamsweiler station master in the 19th century. The connection goes via the Weiss family which is extremely well documented thanks to a write-up from the 1890s which luckily survives in a transcript. So, essentially, our station master's mother was Sophie Weiss, and her sister Maria Margaretha married an innkeeper called Johann Peter Schmidt in Hahnenbach, and his daughter married Ferdinand Weirich, whose name appears on the sign here: 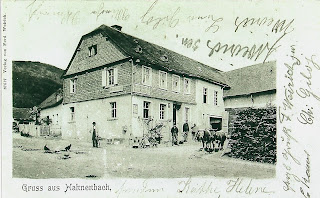 This postcard was sent on 17.8.1904, it carries the signatures of the inn keeper family as well as the station master family who had come over from Adamsweiler to visit (maybe 200 km away). This was part of a legendary journey to the home land to find husbands for the youngest of the five daughters, Helene and Kätha who signed the card.

Ferdinand Weirich's daughter Lina married Christian Giloy, and they kept the business going. In the more recent picture below the signage refers to her as the widow of Chr. Giloy, but I'm not sure when he died. The picture could be from the 1930s I guess, which is also when the oldest daughter of the station master, who had remained unmarried, acquired a piece of land from her cousins and built a house on it to retire there. 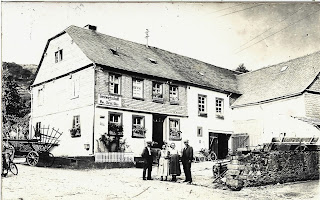 (Loving all the bicycles in this photo, today I wouldn't dare to cycle there, the roads are murderous.)

Some dates for the four relevant generations - quite incomplete, which is why I'm struggling to date the second photo:

The place was still in the same family in my childhood, but I'm not sure who owns it now. It's been known as "Hahnebach Stubb" in recent incarnations.

Updated 11.6.2021 - I rediscovered the date of the first postcard, it was mentioned in a text I had written 7 years ago. Further postcards from that travel exist, will have to find them the next time I'm in situ.

Update 13.3.2022 - Visiting the village in February 2022, I took a few photos of the present state of the building. I hear it's been closed for the last five years. 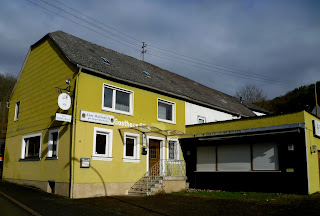 Also, I hadn't realised before that the current annex (on the right) is in a different place to the side building in the early 20th century. Maybe the earlier one was just a wooden barn.

See also my twitter thread as an illustrated TOC of the series.