When I was rounding up 10 cities which my ancestors inhabited between 1900 and 1970, it struck me that my in-laws were attached to one city during that time, but with a duration of stay that is unrivalled on my side. A young couple arrived in the industrial city of Hamborn (now part of Duisburg) from rural East Prussia in October 1922. She registered at the new residence on the 13th, he started work at the coal mine Gewerkschaft Friedrich Thyssen, Schacht 1/6 on the 23rd (and yes, I have the documents for both these dates). They married five months later and stayed at Hamborn the rest of their lives, which in her case meant more than 56 years. The last of their children died there in 2015, so that makes 92 years of family presence.

That’s real commitment to a place. The lifetime of Hamborn as a city was much shorter, however. After a decade of dramatic population growth, the village, which had only started to run a market in 1898, became a city in 1911. In 1929, its 132,000 inhabitants lost the fight against the all powerful neighbour and became part of Duisburg, initially as a conglomerate called Duisburg-Hamborn, but from 1935 simply as one of many districts of the city of Duisburg. Although many never accepted that state of things. Postcards were still printed with the line “Industriestadt Hamborn” (the example below dates from 1961, would you believe). Another city lost to the efficiency drive, like Rheydt on the other side of the river Rhine. 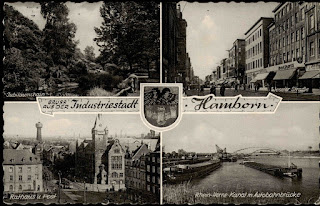 I borrowed the photo from the usual source, but we do in fact own a specimen of this postcard, and around 20 more. I've visited the attractions in the two frames at the top, but need to go back to see the old town hall and water tower in the one at the bottom left.

Update 25.6.2021: Der Spiegel reports that 20 railway lines are set to be revived, including (number 11 in the list) the one from Oberhausen to Wesel that serves the station at Hamborn. (The main line goes via Sterkrade and passes to the east of Hamborn).