united colours of the Black Sea

When I suggested writing the feature that came out this week, on the Scythians, the editor recommended the book Black Sea, and I managed to read most of it in time for the feature and the rest shortly after. While it was very instructive on the Scythians and their role as “barbarians” in the eyes of the Ancient Greeks, their history (which I’ve written about in the feature) is just one of many slightly crazy things that have been going on around the Black Sea over the last 3000 years. 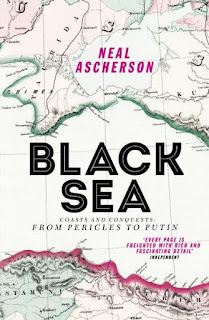 In ten chapters (untitled, keeping the suspense as to what they may be about) Neal Ascherson covers the cultures that have lived around the Black Sea, rounding the book off with a chapter about the water body itself as an ecosystem. Apart from the Scythians, Cossacks and Sarmatians of the northern shore, we get to know Pontic Greeks in today’s Turkey, many of whom decided to return to their homeland in the 1920s, after 3000 years of absence, and then wondered why people in Greece weren’t quite like their idea of Greekness.

We get insights into the birth of Polish nationalism, dreamed up at the sea port of Odessa (run by French aristos who fled the Revolution), at a time when Poland didn’t exist. Ascherson, who has also written a history of Poland, is very engaging on the weird and wonderful ways in which groups of people conjure up a national identity when they don’t have a country and perhaps no more than a shared language and/or religion to support the idea of “nation”. In some of the smaller groups scattered around the area, even the language is in need of saving, and some appear to have adjusted their religion flexibly to whoever ruled the land.

Alternative models to the modern nation state have worked around the Black Sea, such as the Greek trading ports that coexisted peacefully with Scythians and Sarmatians in the hinterland. The multi-national empires of the Ottomans and Russian Tsars, and then the Soviet Union, suppressed the regional nationalisms, which then came back with a vengeance. After the demise of the Soviet Union, nations around the Black Sea engaged in regional wars, including the 1992 war between Georgia and Abkhazia, and the current conflict in Ukraine.

All in all a rich tapestry of cultural diversity and historical ironies, also reflected in the light of recent events – this edition was updated in 2015. Sadly, not much is said about the German settlers in the Odessa region, whose number included two of my ancestors (see the legendary Klundt clan blog entry). I suppose these people were just too normal and boring compared with the likes of Pontic Greeks and Scythians.