As I write this, it is becoming clear that the govt. has lost control over the spread of Covid for the third time, so if they continue to eff up things like this, I'm still in with a chance to get through a considerable part of the Bach suites.

In May, I memorised what was missing from the Courante in G, and promoted it to metronome work - although it's rhythmically very simple, it still needs speeding up considerably. It's a running dance, and I'm still sleepwalking. I also consolidated the minuets in D major and D minor to an extent that I can play them as a unit as they are meant to be played.

In June, I am aiming to memorise the second half of the Gigue in D minor, and also do more park "performances" (if people around politely ignore me that's good enough). May was very rainy, so not much luck with playing cello in the park, but at least the Wednesdays were ok for Cowley Orchestra, which in very much reduced formation played some chamber music on three evenings this month. And accidental audiences were very appreciative - many will not have seen any actual humans playing actual musical instruments in more than a year!

So after 15 months with 420 practice days, 12 movements studied, and 424 bars memorised, my list now looks like this: 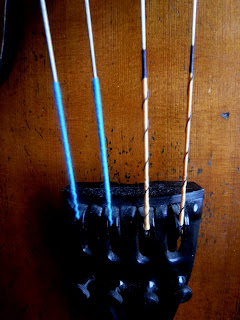