Back in the 00s I was affiliated with Birkbeck College London as a science writer in residence, which is why I have kept a soft spot for all things Bloomsbury. So I couldn't resist this antiquarian edition of a guide to the architectural history of the area, and I enjoyed reading it as it filled in a lot of background knowledge regarding streets I know from my ramblings half a century after the book was published. In lieu of a review, I'll just type out what to me was the highlight of the book, the description of St. Pancras station (which I have, of course, seen quite a few times since the Eurostar terminal moved there).

The station, the authors inform us

"opened in 1873. What a glorious, fantastic, ridiculous sight it is! However much one may be inclined to scoff at the Gothic grotesque, so pretentious yet only a humble railway station, one cannot help being overawed by its mad magnificence. Glance up at its pinnacles and towers, its multitude of steeples and crazy battlements clustered together in a perfect orgy of uselessness. Who can fail to be impressed? Who is so unimaginative that they look upwards without a whole host of fancies taking wing in their brain? St. Pancras Station, rightly viewed, is a medieval fortress, an ogre's castle, a challenge to the prosaics of the twentieth century. A piece of empty pomp, a grandiose hotch-potch of bad taste? It is all that perhaps, but it is also a fairy-story, a common-place everyday thing transformed into a romance in the Chesterton tradition. To fully appreciate the weird wonder of St. Pancras visit it late at night or in the small hours. It has rained earlier and now a fresh wind is blowing down the empty street. Look up at the towers and ornate chimneys with the swift-moving clouds behind. There is a moon, riding on her back across the sky and lighting the brave spires with a silvery but fitful light. Surely in that patch of dark shadow thrown by the nearest tower onto the shining wet roof there is a flurrying movement? A witch pale and grim on her broomstick, flitting with marvellous dexterity between the erratic lumps of masonry, her black cloak billowing behind her? Look at those little windows at the very top, so small, dirty and neglected that by day it seems scarcely possible they could light real rooms, surely the moon's passing gleam reveals, for a fleeting moment, a white figure moving back and forth? A princess in distress in the giant's castle or merely the ghost of some long-dead and forgotten claimant in one of those legal actions against the railway companies which were so common during the last century?"

My first excited reading of all those negatives framed by question marks left me unsure whether the writer hated or secretly loved the structure. On rereading it now I realise they simply had a blast trying to reflect in their writing style the exuberance of the architecture. In the rest of the book, even though there are some battle scenes with angry mobs storming Georgian mansions, and quite a few violent deaths reported, there's nothing quite like this outburst of the imagination.

Personally I always appreciate the station as a fairytale castle each time I see it, and I'm glad it survived into our century and got a very thoughtful refurbishment when it became St. Pancras International. 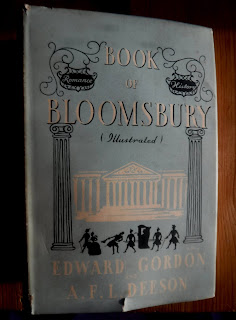 Update 8.7.2021: The book mentioned the London tram system which I had never heard of before, as an attraction to visit before it disappears. Less than a week after I posted this, there was an article in the Guardian about a tram reopening for visitors.