I'm regularly using Oxford's only bandstand this plague year summer, both for chamber music and for folk sessions, so I am often reminded of one of my favourite French songs, an ancient one from the 1930s, which gently mocks the culture of widespread amateur / semi-professional music making for which these structures were built. I'm loving all the attention-grabbing flourishes and fanfares in the melody which are obviously a parody of the type of light music you might have heard at a bandstand on a summer evening in the early 20th century. Now that this culture has gone the way of the dinosaurs (along with the ophicleide mentioned in the text) and bandstands are mostly silent, I wonder what the authors of the song might have to say about it.

I've known the song since forever in the version performed by Georges Brassens (1921-1981) in a radio programme dedicated to the popular music of his youth: Georges Brassens chante les chansons de sa jeunesse (also available as CD).

Looking it up right now, there seems to be a general block in place forbidding users in the UK to access this recording. If you're outside the UK, you may be lucky to be able to listen to it on Soundcloud here.

I never knew the original version, only now I unearthed this one from jazz band leader Ray Ventura (1908-1979) which I'm assuming must be the version Brassens heard in his youth.

The only modern cover I've found is this one, which looks like a music teacher made it for kids, but it does have rolling lyrics, so if you want to learn the song it's a good resource (there are also chords provided here). According to this video, the composer is Marc Lanjean, and the lyrics are by Maurice Vandair.

I've poked the very amazing Pomplamoose via twitter, I think they should definitely cover this. 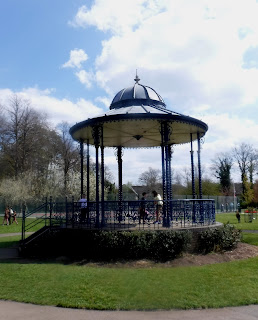 Not our local bandstand, but one I saw at Romsey on a day trip earlier this year.

There is also a lovely flickr group called Bandstands Worldwide where you'll find some amazing structures (loving this one in Hove) as well as the occasional contribution from me.