When I revisited our ancient noteflight scores of duets we arranged for cello and flute, I also remembered the list of duets that I had discovered online back then and that I found helpful for some initial directions. Back in 2011 it was hosted on the comprehensive flute website of jazz flautist Larry Krantz and credited to Julia Larson Mattern and others. Sadly it is no longer online, so I've used the copy I kept as a starting point to make my own list by adding in youtube links and dropping those items of which I could not find any performance. I also removed the comments from the original list and added some of my own. Oh, and I made a YouTube playlist.

Work in progress. Surely there must be more music that works well for cello and flute? Suggestions welcome.

So here's what I've got in alphabetical order:

1. Beethoven - Three Duets (published by Kalmus) Lovely music from a young Beethoven, written for clarinet and bassoon but available in several other combinations too. We played four or five of the 9 movements back then, some in arrangements derived from an edition for violin and viola, see the list of our scores. YouTube performances of duo No.1: Duo Dare plays first movement only, but clearer sound than this recording of the whole duo.

2. Besozzi, Alessandro - Divertimento in F (published by Urtext Premiere Publication) YouTube I thought this sounded a bit lame? (Besozzi has lots of trios though, which I'll still need to check)

5. Carrick, Richard - La Scene Miniature (self published) for piccolo and cello a quartet version with composer on piano.

8. Febonio, T.G. - Rustic Airs and Folk Dances (published by ALRY) a selection of the pieces

10. Handel - Acht Stücke (published by Amadeus) NB I have this edition, not clear where the pieces come from, no opus number etc. can’t spot any of them on youtube.

13. Jevtic, Ivan - Musica per Due (published by LeDuc) YouTube

17. Villa-Lobos - Assobio a Jato (Jet Whistle) One of many recordings available on YouTube 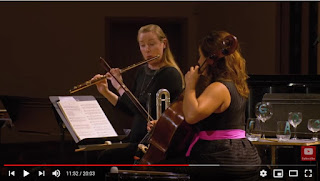