A mysterious photo from my inlaw family - there is no memory of anybody in the family ever having played a musical instrument, but then there is also this photo with the name of a great-uncle on the back (Friedrich Kosmowsky, sometimes also spelled Kosmowski), and the place name Neumühl, which is now a district of Duisburg. Several of Friedrich's relatives came to nearby Hamborn in 1922. To add to the confusion there was also a place called Neumühl in the area of Eastern Prussia where they came from (Kreis Wehlau), also very close those who didn't move west in 1922. This one is now part of Kostromino in the district of Kaliningrad. It could be either - although given that the Hamborn relatives didn't know anything about musical adventures, I am inclined to think they happened in Eastern Prussia. 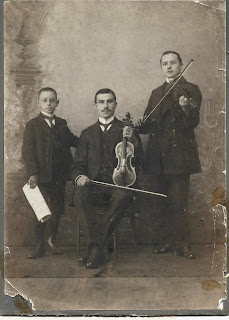