It only occurred to me recently that the generations from my grandparents back to their grandparents lived in towns and cities most of the time. One of those who lived all their lives in cities was Heinrich the cellist, and I am beginning to realise that his biography lines up some amazing places, including several where I wouldn't mind living myself. As I raved about Elberfeld/Wuppertal recently, I am now also going to introduce some of the other places he lived, beginning with Strasbourg. He arrived there in April 1901 when he joined the army, and he stayed until April 1906, when his regiment was moved to a smaller town as a punishment (Strafversetzung), although I don’t know what crime they were being punished for. He also met his future wife there. Maria arrived in 1903 to train as a secretary and must have stayed until they married in 1908, so she, too, spent around five years in the city. 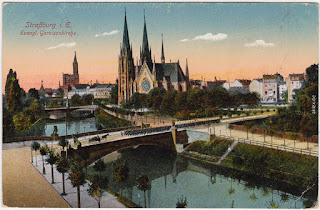 Postcard sent in 1917, showing the view across the Neustadt with the neogothic church, towards the medieval core of the city with the gothic cathedral.
Source

Strasbourg in 1901 must have been amazing. After the newly founded German Empire had taken over the city in 1871, it went to huge efforts to expand it and make it a showcase of urbanisation (while forcing the city itself to pay the bills for the works). Inspired by the grand boulevards in Paris built in the 1850s by Haussmann under Napoleon III, the new quarters (Neustadt) were to triple the built area of the city and increase the population from 80,000 to 180,000 by 1914.

A new main station, new university buildings, administration, theatres, churches as well as a synagogue, everything had to be of the finest and designed with style. Even the army barracks where our cellist lived for five years were looking amazing (Manteuffel-Kaserne, now Quartier Stirn, used as an education facility by the French army). From neo-classicism to art nouveau, everything was there and much of it is still there today. Ironically, even though it is now back on French territory, the Neustadt in Strasbourg is the best-preserved example of German urban architecture of that era, and has become part of a UNESCO World Heritage Site in 2017.

I have to admit, although I’ve visited Strasbourg a dozen times (without really thinking much about the old cellist), I never explored the Neustadt beyond the main station and the always identical path which led me from there into the medieval centre of the city, on the main island. Essentially, Rue du Maire Kuss throught to Place Kleber. (Heck, I've even spent a night in the Neustadt, staying at the Hotel du Rhin, opposite the station!) Last time I was there, I noticed the church St. Paul (shown above), which was part of the Neustadt development and was inspired by the gothic Elisabethkirche in Marburg, but I only saw it from across the water, from the main island. Have to go back and visit properly.

Update 23.8.2021: Further insights into Heinrich and Maria's adventures in Strasbourg