One of the many things I learned in recent years while playing wrong notes in Oxford pubs is that there is a research group at Oxford studying rhinoceros reproduction biology with a view to bringing back the northern white rhino. This subspecies is functionally extinct as only two females survive.

Inspired by this I have looked at the wider field of using reproductive biotechnology in the service of conservation efforts and found out fascinating things about species including lions, black-footed ferrets and pandas. The resulting feature is out this week: 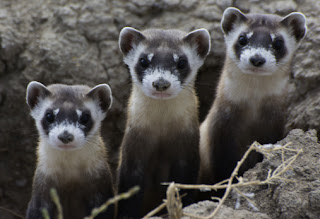 Black-footed ferrets have been saved from extinction with biotechnological methods. The cloning effort that recently marked its first live birth aims to introduce genetic diversity into an inbred population. (Photo: Kimberly Fraser/USFWS (CC BY 2.0).)

PS: If I've got my numbers crunched correctly, this is the 250th feature I've done in this format, which started in February 2011. At an average length of roughly 2000 words, that's half a million words. All articles older than 12 months, that's more than 90% of those 250, are in the open archive, so free access for all. Each one has an entry tagged currentbiology on this blog.