I picked up a battered paperback edition of this novel from a book exchange mainly on the merit of its musical title (a reference to the poetic source of Schubert’s song cycle “Die schöne Müllerin” as I found out later) and the fact that there was a cello shown on the cover. The cello arrives fashionably late in the book, making its entry on page 90, but with a strong back story, involving a five-generation transfer in the family line, and a period spent buried in the woods. The young cellist who inherits the instrument is arguably the main character in the book, although the author has carefully constructed a kind of hypercube in which a dozen characters are connected in multiple ways, sometimes involving very improbable coincidences. The only living hornplayer mentioned, however, remains an elusive and very marginal character.

Apart from the welcome presence of celloing (although some very subtle details tell me the author perhaps doesn’t know much about cellos), other bonus points include occasional visits to Oxford, where Trapido lives, and, for me coming to it with 23 years delay, a glimpse of the almost forgotten world of the 1990s. People using their mobile on the train because they can, only to say “I’m on the train”, people smoking in restaurants, professionals mentioning the internet as a special tool at their workplace, and students studying without worrying about tuition fees. Characters can have Middleton as a family name without any royal implications. A distant world – although Oxford sounds very much the same as always.

All in all, a well balanced tragicomedy, great fun to read, and, notwithstanding the hornplayer of the title, I’ll file it under cello books. Oh, and I am listening to a CD of “Die schöne Müllerin” sung by Fritz Wunderlich right now (inherited from my mother). That wouldn’t have happened if I hadn’t read the book. 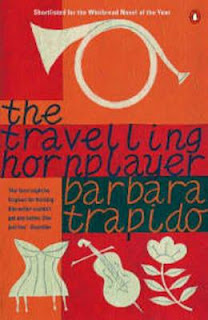 cover of the edition I have. The cello is (just about) recognisable by its spike.