journey inside my guts

While experiences may vary, I didn't find it terribly unpleasant and as a scientifically curious person I rather enjoyed the opportunity to follow the camera view on a large screen and travel through my own guts.

I just found out that the programme has since been scrapped, and its history, shall we say, adjusted to the situation. The relevant NHS website now says:

"Previously, some people aged 55 were invited for a one-off test where a healthcare professional uses a tube with a camera to look inside the bowel. This is called bowel scope screening. Bowel scope screening is no longer offered."

NB: some people were invited. When it was my turn, the official info said, as quoted above "all men and women aged 55."

For a competent analysis of the withdrawal of the screening programme, see this blog entry from a cancer charity.

Although I was lucky in getting the screening before it disappeared, I find it upsetting that there is very little interest around here in preventing disease before it happens. The NHS is brilliant because it's free at point of use as it should be and good at treating people when they get ill, but preventative measures aren't its strongest point and they are the first to suffer when things get difficult.

To me preventing disease is the most important job of the health system. I remember my grandparents being in and out of hospitals for bowel operations repeatedly, and I'm quite sure I prefer a camera up my bum to their experience.

Checking up the numbers:

There are 900,000 people in the UK aged 55 right now. We're talking about 3,000 lives that could be saved every year and 6,000 bowel cancer cases that could be prevented according to the NHS info I cited above. This may be small fry in comparison to the numbers currently killed by the mishandling of the Covid pandemic, but I am sure those 3,000 55-year-olds would have liked to live a bit longer ... 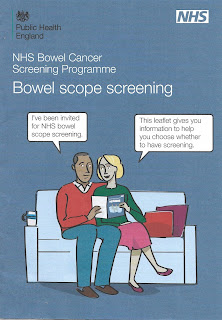 Cover of the brochure I received in 2019. Shows it's good to keep the paperwork, because online info gets adjusted to political convenience.